RACO (the Relational Algebra COmpiler) is a polystore middleware system that provides query translation, optimization, and orchestration across complex multi-system big data ecosystems. RACO provides language and optimization services for the Myria big data management stack and serves as a core component of that project. In addition to Myria, RACO includes support for Spark, SciDB, Grappa, C, and SQL backends. 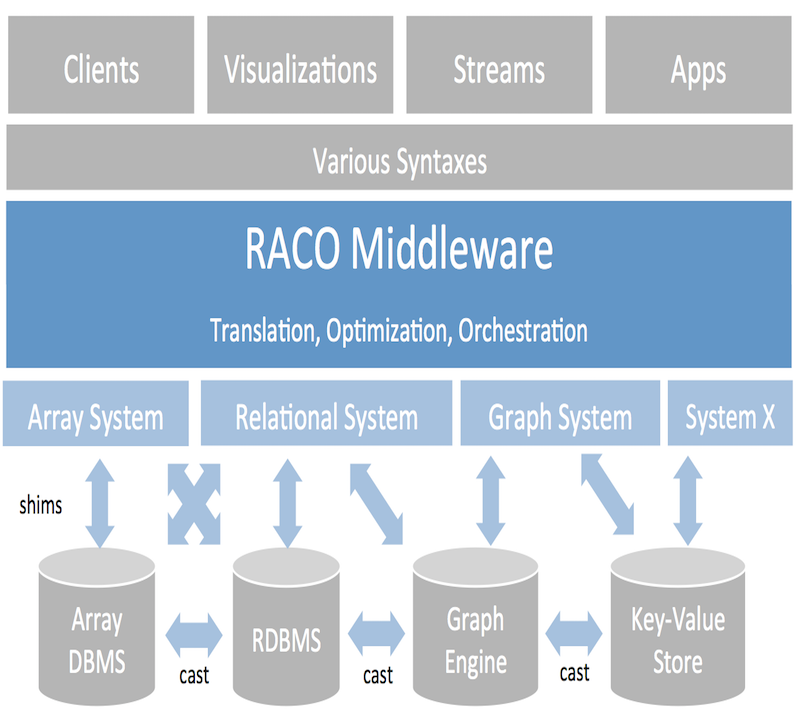 Why does RACO exist?

There has been a "Cambrian explosion" of big data systems proposed and evaluated in the last eight years, but relatively little understanding of how these systems or the ideas they represent compare and complement one another. In both enterprise and science situations, "one size does not fit all": we see analytics teams running multiple systems simultaneously, including specialized systems for limited use cases.

The proliferation of systems has lead to a surfeit of languages and APIs. It is time to consider a new framework that can span these systems and simplify the programming and maintenance of Big Data applications. There are two key goals for such a framework:

We are designing RACO to fullfill these requirements. More generally, we are interested in measuring the price of abstraction: Can we generate code that competes with hand-authored programs, including programs in HPC contexts? Our hypothesis is that we can: there seem to be similarities between the ``tricks’’ used in enterprise big data systems and scientific programming contexts related to handling skew, dynamic partitioning, and managing iteration. We aim to model and exploit these tricks to provide a common programming model without paying performance penalties.

This webpage was built with Bootstrap and Jekyll. You can find the source code here. Last updated: Aug 02, 2021