Research interests:
Algorithms, complexity, and the theory of computation. Geometry and analysis at the interface between the continuous and discrete. Probability and stochastic processes. Metric embeddings, spectral graph theory, convex optimization. [CV]

Research interests:
Algorithms, complexity, and the theory of computation. Geometry and analysis at the interface between the continuous and discrete. Probability and stochastic processes. Metric embeddings, spectral graph theory, convex optimization.

We present an \(O((\log n)^2)\)-competitive algorithm for metrical task systems (MTS) on any \(n\)-point metric space that is also \(1\)-competitive for service costs. This matches the competitive ratio achieved by Bubeck, Cohen, Lee, and Lee (2019) and the refined competitive ratios obtained by Coester and Lee (2019). Those algorithms work by first randomly embedding the metric space into an ultrametric and then solving MTS there. In contrast, our algorithm is cast as regularized gradient descent where the regularizer is a multiscale metric entropy defined directly on the metric space. This answers an open question of Bubeck (Highlights of Algorithms, 2019). 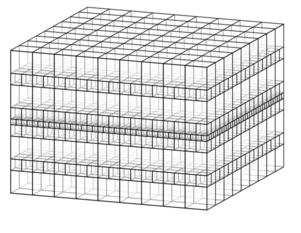 In fact, our algorithm satisfies a set of even more refined guarantees; we are able to exploit this property to combine it with known random embedding theorems and obtain, for any \(n\)-point metric space, a randomized algorithm that is \(1\)-competitive for service costs and \(O((\log n)^2)\)-competitive for movement costs.

We consider metrical task systems on tree metrics, and present an $O(\mathrm{depth} \times \log n)$-competitive randomized algorithm based on the mirror descent framework. For the special case of HSTs, we refine the standard approach based on combining unfair metrical task systems, yielding an $O(\log n)$-competitive algorithm. This is tight up to the implicit constant factor. Using known random embeddings of finite metric spaces into HSTs, this yields an $O((\log n)^2)$-competitive algorithm for general $n$-point spaces. 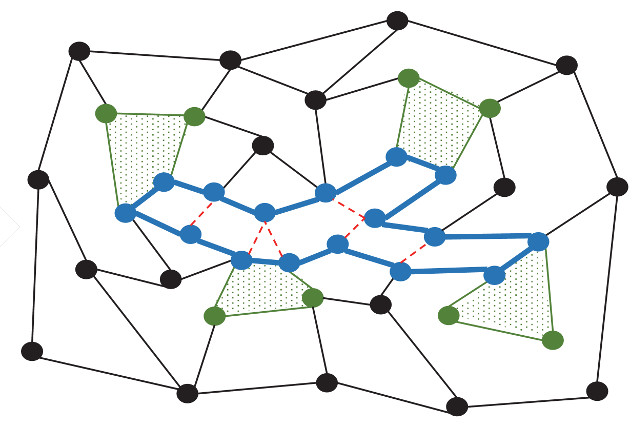 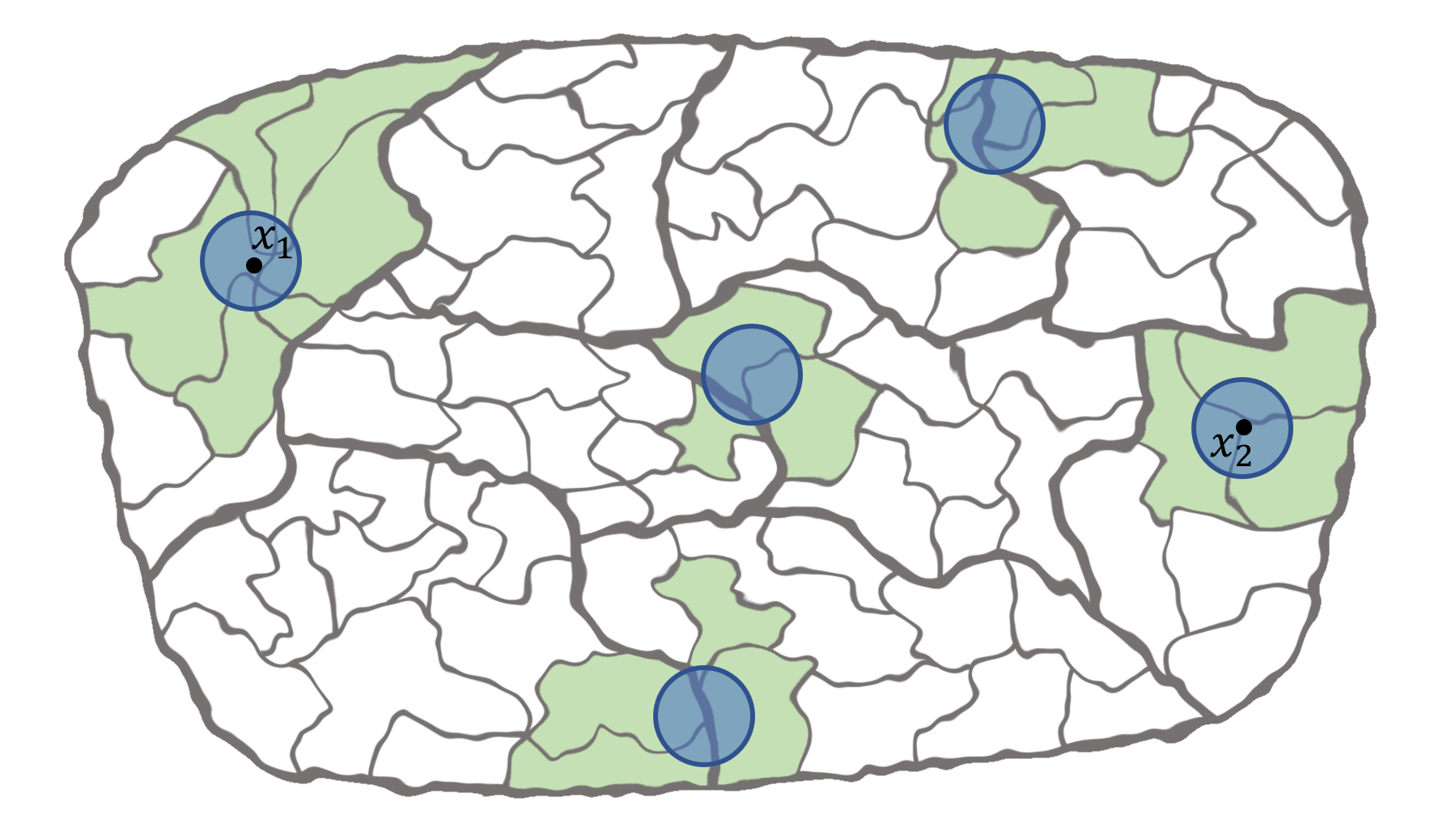 We give a poly(log k)-competitive randomized algorithm for the k-server problem on general metric spaces. The best previous result independent of the underlying metric space is the 2k-1 competitive ratio established for the deterministic work function algorithm by Koutsoupias and Papadimitriou (1995). 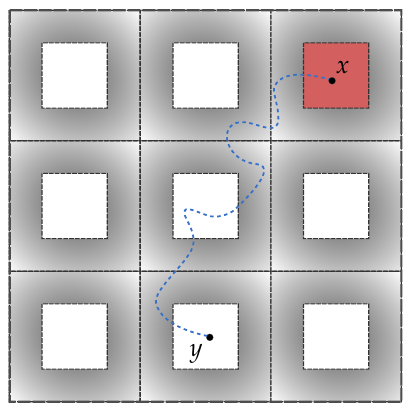 We investigate the validity of the “Einstein relations” in the general setting of unimodular random networks. These are equalities relating scaling exponents:

This has a number of consequences for unimodular random networks arising from statistical physics. 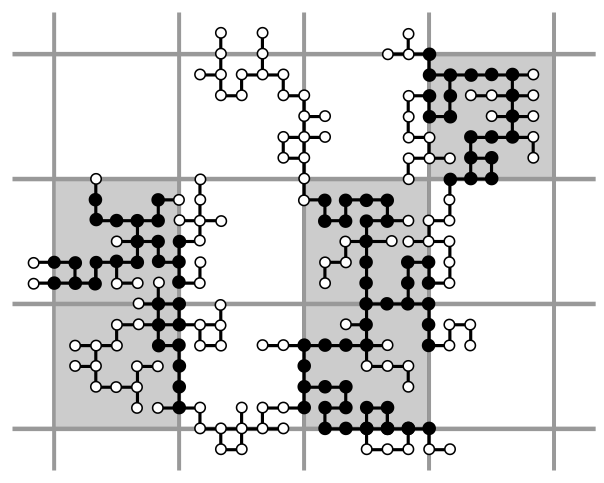 We show that random walk on the incipient infinite cluster (IIC) of two-dimensional critical percolation is subdiffusive in the chemical distance (i.e., in the intrinisc graph metric). Kesten (1986) famously showed that this is true for the Euclidean distance, but it is known that the chemical distance is typically asymptotically larger.

More generally, we show that subdiffusivity in the chemical distance holds for stationary random graphs of polynomial volume growth, as long as there is a multiscale way of covering the graph so that “deep patches” have “thin backbones.” Our estimates are quantitative and give explicit bounds in terms of the one and two-arm exponents. 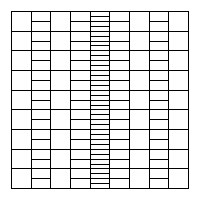 By a well-known theorem of Benjamini and Schramm, such a graph cannot be a unimodular random graph. We also give examples of unimodular random planar graphs of uniform polynomial growth with unexpected properties. For instance, graphs of (almost sure) uniform polynomial growth of every rational degree $d > 2$ for which the speed exponent of the walk is larger than $1/d$, and in which the complements of all balls are connected. This resolves negatively two questions of Benjamini and Papasoglou (2011). 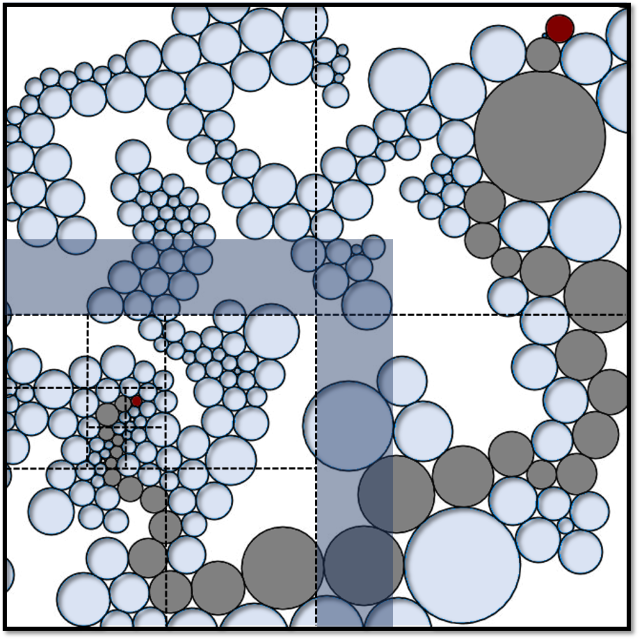 If \((G, \rho)\) is the distributional limit of finite graphs that can be sphere-packed in \(\mathbb{R}^d\), then the conformal growth exponent of \((G, \rho)\) is at most d. In other words, there exists a unimodular “unit volume” weighting of the graph metric on G such that the volume growth of balls is asymptotically polynomial with exponent d. This generalizes to graphs that can be quasisymmetrically packed in an Ahlfors d-regular metric measure space. Using our previous work, it gives bounds on the almost sure spectral dimension of G. 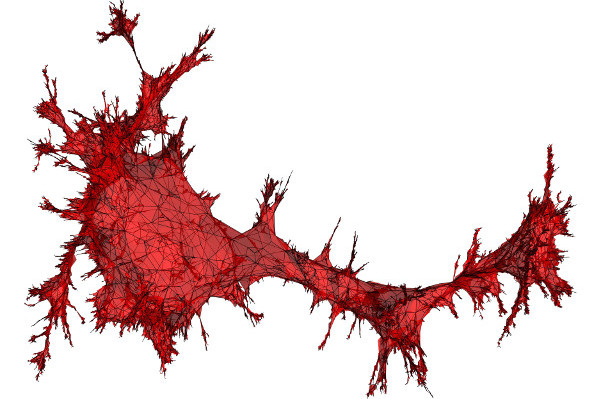 For a unimodular random graph \((G, \rho)\), we consider deformations of its intrinsic path metric by a (random) weighting of its vertices. This leads to the notion of the conformal growth exponent of \((G, \rho)\), which is the best asymptotic degree of volume growth of balls that can be achieved by such a weighting. Under moment conditions on the degree of the root, we show that the conformal growth exponent of a unimodular random graph bounds its almost sure spectral dimension.

For two-dimensional growth, one obtains more precise information about recurrence, the heat kernel, and subdiffusivity of the random walk. In particular, this gives a new method for studying the uniform infinite planar triangulation (UIPT) and quadrangulation (UIPQ). 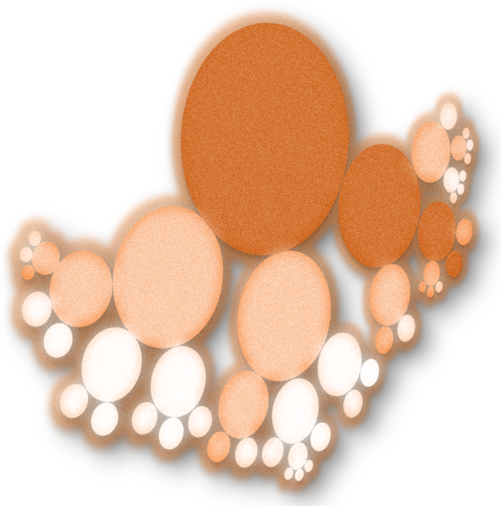 When combined with Bartal’s static HST embedding reduction, this leads to an \(O((\log k)^2 \log n)\)-competitive algorithm on any n-point metric space. We give a new dynamic HST embedding that yields an \(O((\log k)^3 \log \Delta)\)-competitive algorithm on any metric space where the ratio of the largest to smallest non-zero distance is at most \(\Delta\). 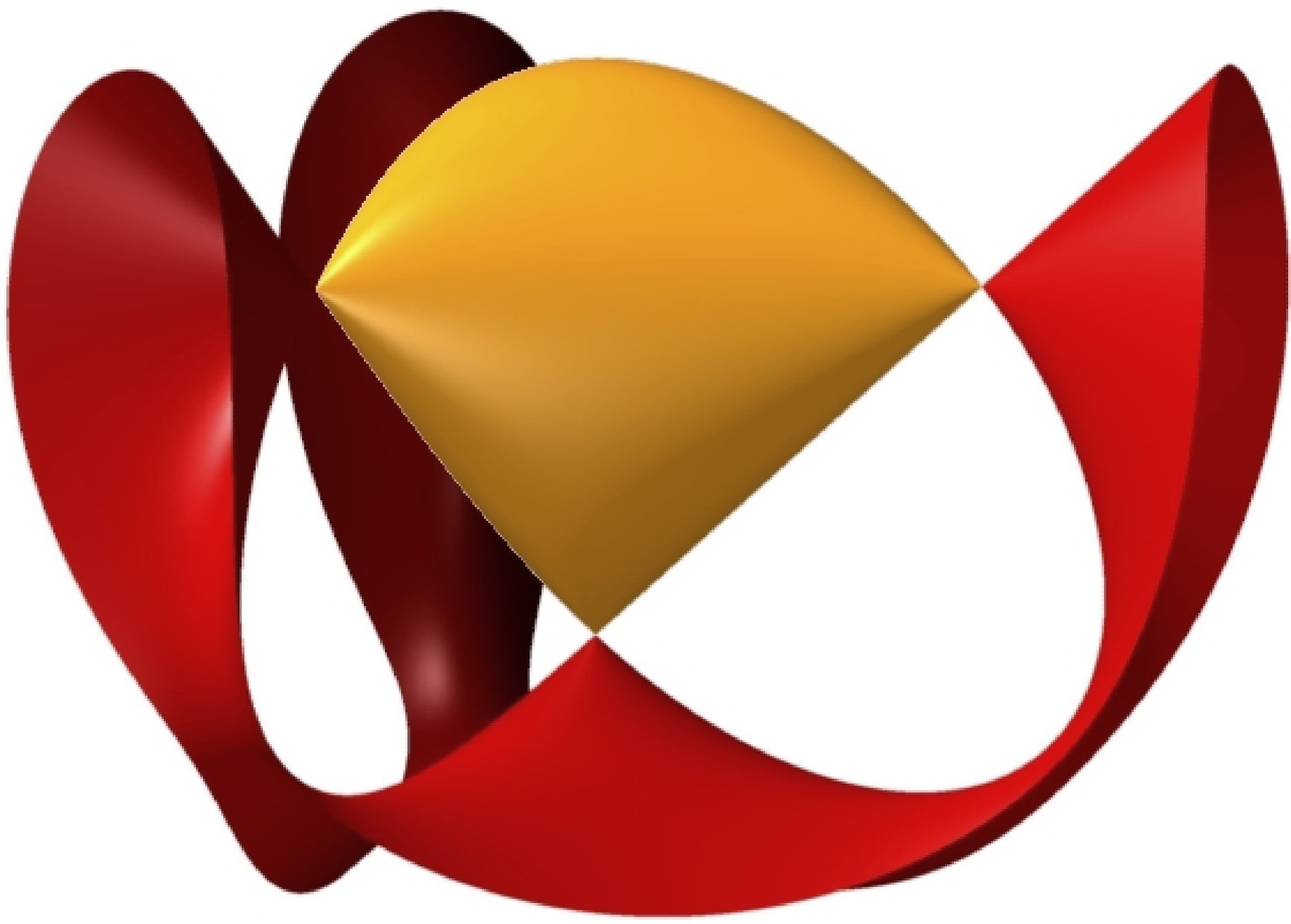 We introduce a method for proving lower bounds on the efficacy of semidefinite programming (SDP) relaxations for combinatorial problems. In particular, we show that the cut, TSP, and stable set polytopes on n-vertex graphs are not the linear image of the feasible region of any SDP (i.e., any spectrahedron) of dimension less than \(2^{n^c}\), for some constant \(c > 0\). This result yields the first super-polynomial lower bounds on the semidefinite extension complexity of any explicit family of polytopes.

Our results follow from a general technique for proving lower bounds on the positive semidefinite rank of a matrix. To this end, we establish a close connection between arbitrary SDPs and those arising from the sum-of-squares SDP hierarchy. For approximating maximum constraint satisfaction problems, we prove that SDPs of polynomial-size are equivalent in power to those arising from degree-O(1) sum-of-squares relaxations. This result implies, for instance, that no family of polynomial-size SDP relaxations can achieve better than a 7/8-approximation for MAX-3-SAT.

[ abs | bib ]  Regularization under diffusion and anti-concentration of the information content, with R. Eldan (FOCS'15; Duke)

We show that under the Ornstein-Uhlenbeck semigroup (i.e., the natural diffusion process) on n-dimensional Gaussian space, any nonnegative, measurable function exhibits a uniform tail bound better than that implied by Markov’s inequality and conservation of mass. This confirms positively the Gaussian limiting case of Talagrand’s convolution conjecture (1989). 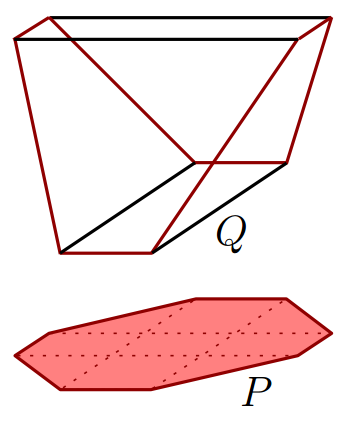 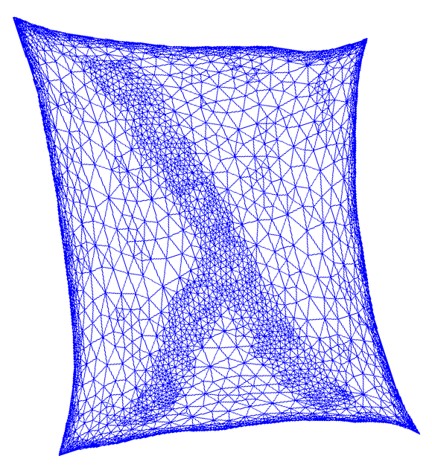 It has been conjectured that an analogous characterization holds for higher multiplicities: There are k eigenvalues close to zero if and only if the vertex set can be partitioned into k subsets, each defining a sparse cut. We resolve this conjecture positively. Our result provides a theoretical justification for clustering algorithms that use the bottom k eigenvectors to embed the vertices into \(\mathbb{R}^k\), and then apply geometric considerations to the embedding. We also show that these techniques yield a nearly optimal quantitative connection between the expansion of sets of measure ≈ 1/k and the kth smallest eigenvalue of the normalized Laplacian. 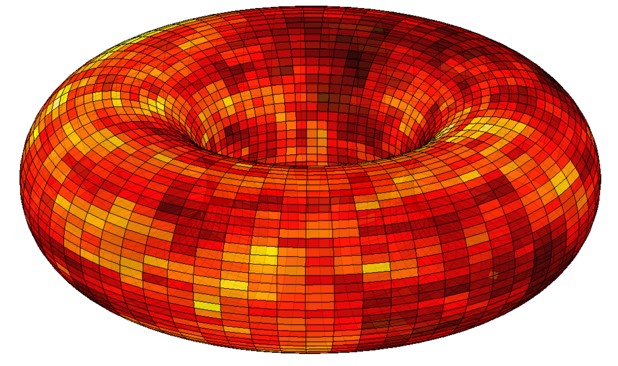 We show that the cover time of a graph can be related to the square of the maximum of the associated Gaussian free field. This yields a positive answer to a question of Aldous and Fill (1994) on deterministic approximations to the cover time, and positively resolves the Blanket Time conjecture of Winkler and Zuckerman (1996).

Video: Cover times of graphs and the Gaussian free field (Newton Institute)
Notes: Majorizing measures and Gaussian processes
Related questions and conjectures (all solved except the one after Lemma 4)

See also the related preprint of Alex Zhai that resolves our main conjecture.

A method is presented for establishing an upper bound on the first non-trivial eigenvalue of the Laplacian of a finite graph. Our approach uses multi-commodity flows to deform the geometry of the graph, and the resulting metric is embedded into Euclidean space to recover a bound on the Rayleigh quotient.

Using this, we resolve positively a question of Spielman and Teng by proving that \(\lambda_2(G) \leq O(d h^6 \log h/n)\) whenever \(G\) is a \(K_h\)-minor-free graph with maximum degree \(d\). While the standard “sweep” algorithm applied to the second eigenvector of a graph my fail to find a good quotient cut in graphs of unbounded degree, the arguments here produce a vector that works for arbitrary graphs. This yields an alterante proof of the Alon-Seymour-Thomas theorem that every excluded-minor family of graphs has \(O(\sqrt{n})\)-node balanced separators.

Related: These methods are extended to higher eigenvalues in a joint work with Kelner, Price, and Teng.
Related: These method form the basis for the uniformization and heat kernel bounds in Conformal growth rates and spectral geometry on distributional limits of graphs. 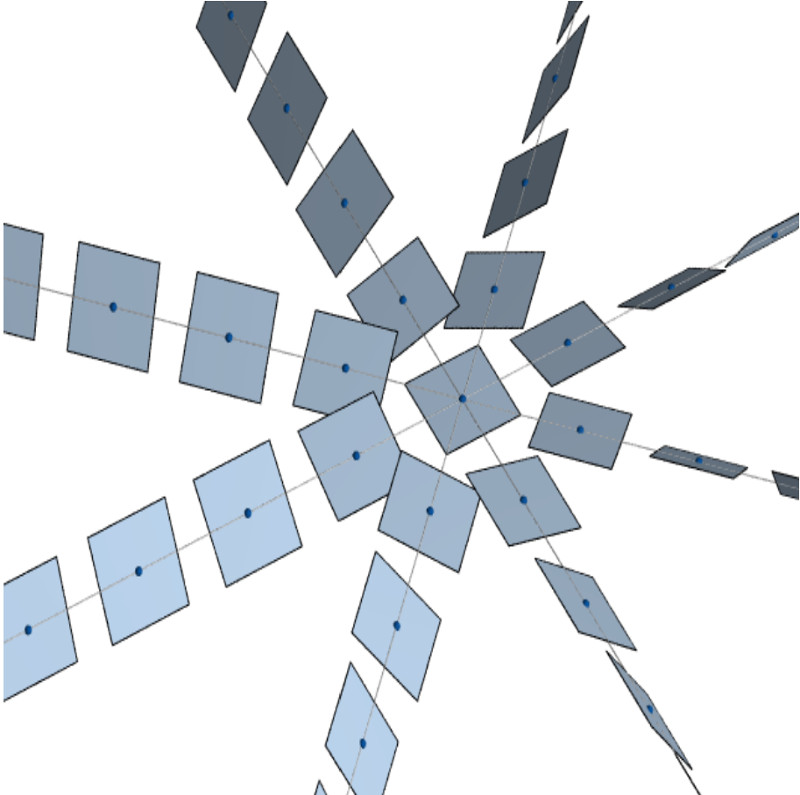 is a metric on \(\mathbb{R}^3\) such that \((\mathbb{R}^3, \sqrt{d})\) is isometric to a subset of Hilbert space, yet \((\mathbb{R}^3,d)\) does not admit a bi-Lipschitz embedding into \(L_1\). This yields a new simple counter example to the Goemans-Linial conjecture on the integrality gap of the SDP relaxation of the Sparsest Cut problem.

Our methods involve Fourier analytic techniques, combined with a breakthrough of Cheeger and Kleiner, along with classical results of Pansu on the differentiability of Lispchitz functions on the Heisenberg group.

We prove that every \(n\)-point metric space of negative type (and, in particular, every \(n\)-point subset of \(L_1\)) embeds into a Euclidean space with distortion \(O(\sqrt{\log n} \log \log n)\), a result which is tight up to the iterated logarithm factor. As a consequence, we obtain the best known polynomial-time approximation algorithm for the Sparsest Cut problem with general demands. If the demand is supported on a set of size \(k\), we achieve an approximation ratio of \(O(\sqrt{\log k} \log \log k)\).